Hey everyone I would like to welcome you back to my sports blog with a primary focus of football for this post. I'm gonna talk about what in my opinion was the game of the week, not in how good of a game but in who played. I'm talking Steelers Ravens, one of the hardest hitting rivalries in the league. I actually bought a pair of cleats to wear while watching this game, I found some cheap ones online at http://www.canada.for-sale.com/football-cleats that are similar to what I used to wear and it helped me to feel closer to this game. Unfortunately that was a bad idea as this ended up a disappointing show from the Steelers who are my absolute favourites so this is obviously written without bias. You mean Baltimore is actually called the Ratbirds?

The Steelers came out to a historically slow start, even with the Killer Bees. Ben Roethlisberger made a start even though he had meniscus surgery only three weeks prior, Antonio Brown remained the top receiver and Le'veon Bell got most of the carries. This didn't seem to help though, as Ben threw his first pass into the dirt and Bell's first two carries went for less than 4 yards total. The defence held fairly strong, allowing Baltimore a first down on their opening possession but ultimately forcing the punt from Sam Koch. Overall, Bell ran 6 times for only 12 yards in the first quarter, well below his average. Roethlisberger was no better, completing only 4 of 8 passes in the same amount of time. It was late in the first however when Baltimore struck first, with Mike Wallace taking a simple slant route for 95 yards. Wallace was a member of the Steelers for 4 years before leaving for Miami, then Minnesota and now Baltimore where he seems to be starting his groove again. By the end of the half, Baltimore had added a field goal to bring their point total to 10 while Pittsburgh was limited to 56 total yards on offence. The second half saw a similar, but slightly different story. 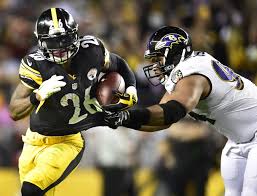 I sure hoped their would be a comeback. Down ten nothing at the half, the Steelers needed to rally their offense together to put something on the board. This isn't the usual game plan for the 2016 Steelers, Before this game, they were top 5 in the league for points scored a game. They are now down to 16th as per http://www.nfl.com/teams/pittsburghsteelers/profile?team=PIT. Nonetheless, they needed to score some points now. Kicking off to start the half, second year receiver Sammie Coats was called offside requiring a second kickoff so off to a good start. The defence managed to hold though, stopping the Ravens on third and ten and forcing another Koch punt. The Steelers had the ball at their own 29, but managed to hold onto it for less than a minute before having to punt the ball to NFL all time leading return man, Devin Hester. The defence was not faltered however and forced another punt from Baltimore just to see a Roethlisbergers pass be tipped and land in the arms of Baltimore defensive tackle Timmy Jernigan. This field position made it easy for the Ravens to make it into field goal range and extend their lead to 13-0. With one more possession before the last quarter, the Steelers went backwards with the ball and were faced with another third and long that turned into a fourth and long. At this point Pittsburgh was 0/10 on third down conversions.

The opening drive of the last quarter held what I and other fans I have discussed with as the final nail in the coffin for Pittsburgh. With 13:44 left in the game, rookie safety Sean Davis released off his assignment on a punt which allowed Baltimore running back Javouris Allen to block the kick which was subsequently returned for a touchdown by Chris Moore. Baltimore succesfully attempted a two point conversion and just like that, the score was 21-0 with less than a quarter left. The Steelers would rally under Ben Roethlisberger like normal, and Ben did manage to find Antonio Brown in the end zone for a 23 yard touchdown. Ben would add to the score with a 3 yard run later in the game with no timeouts left to bring the Steelers withing a touchdown, but a messed up offside kick that will unfairly go down as the worst kick in NFL history (even the ref was laughing) gave the Ravens the ball with 44 seconds left, and the rest was history. Joe Flacco took two kneel downs at centre field ensure the Ravens third win over the Steelers in 2 years, a stat that doesn’t sit well with any Steelers fan. I think I may need to go climb a mountain to forget about this game. Wouldn’t be a bad idea, would help with my fitness too.

A Sticky Situation →← Taking a run